There are new developments coming out of the U.S. Court of Appeals for the Ninth Circuit as the debt collection exception is held as unconstitutional. No doubt many of you are very familiar, if not somewhat familiar, with the Telephone Consumer Protection Act (TCPA). Most commonly, it focuses on the fair and prohibited use of an Automatic Telephone Dialing System (ATDS) in communicating with, or contacting, individuals without prior written consent. Primarily, it pertains to marketing phone calls or text.

In June, in the case of Duguid vs Facebook, the Ninth Circuit filed their submitted arguments that pertain to the commonly referred to “debt collection exception,” to the TCPA, in which the exception was found to be unconstitutional. The argument being that the language of the debt collection exception is entirely content-based, and is therefore in contradiction with the First Amendment. Subsequent arguments laid before the Ninth Circuit, as to the purpose and validity of the exception failed to impress the judges.

The Ninth Circuit, in other words, “held that the[editor’s note] 2015 amendment to the TCPA excepting calls ‘made solely to collect a debt owed to’ the United States government was invalid.”

You can read the full arguments and accounts by the Ninth Circuit panel here. 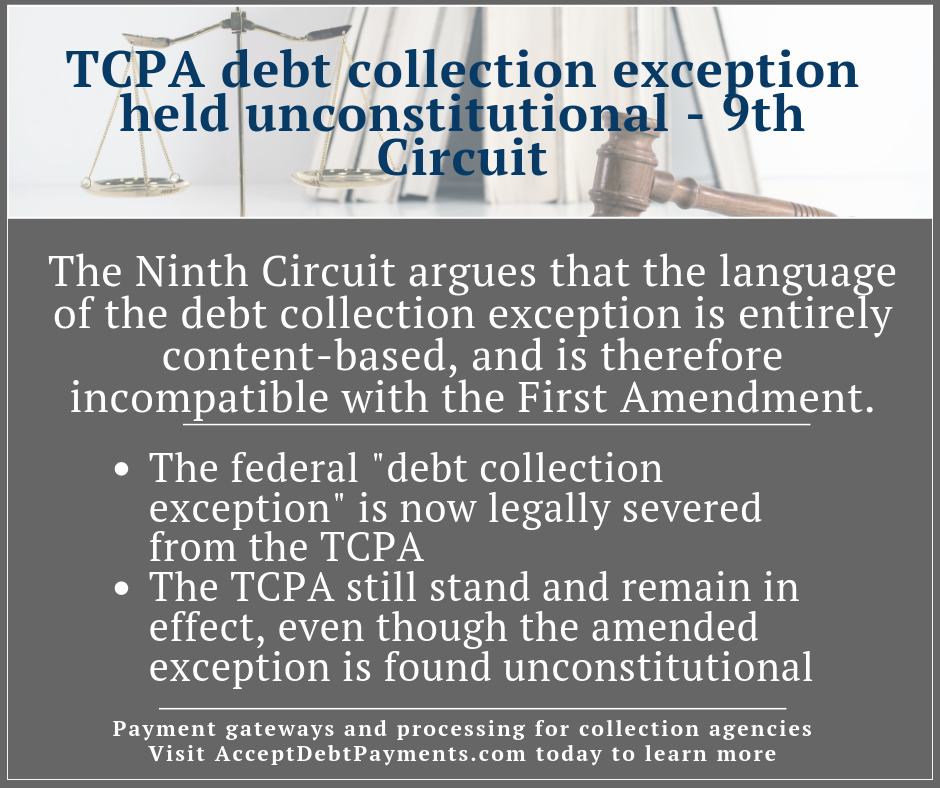 During a Court of Appeals for a putative class action against a large social networking site for alleged use of ATDS, a Ninth Circuit panel affirmed the largely held definition of an ATDS. This definition is based on the decision in Marks v. Crunch San Diego, which states that an ATDS is “equipment which has the capacity to – (1) to store numbers to be called or (2) to produce numbers to be called, using a random or sequential number generator – and to dial such numbers automatically.”

In the Ninth Circuit panel’s conclusory argument, they found that the U.S. government did not have sufficient ground to maintain the debt collection exception to the TCPA. To be clear, the debt collection exception relates to calls “made solely to collect a debt owed to or guaranteed by the United States.” The reasoning of the panel was that an automated phone call, text, or other communication for the purpose of collecting federal debt is just as disruptive to- and equally breaches the privacy of – U.S. citizens as any other form of automated communication with any other message. Therefore, the exception is inherently content-based, and is subsequently contrary to the First Amendment.

The results and additional rebuttals to the government’s arguments

You can see a more detailed account of the Ninth Circuit panel and their arguments here.

Most debt collection agencies have little cause for concern, as the debt collection exception directly relates to third-party agencies that collect debt on behalf of the federal government. However, it should serve as a reminder, especially if you frequently use ATDS’ to place calls or send texts for debt collection purposes.

The interpretation of the law as it relates to the fair use of ATDS does vary from state to state, court to court. In other words, it’s certainly worth taking a second look and thinking things over before diving in with using automatic telephone dialing systems.

After all, it’s not long ago since we discussed new interpretations of the Fair Debt Collection Practices Act (FDCPA).

AcceptDebtPayments.com is a website dedicated to assisting debt collection companies both large and small with effective, simple to manage credit card processing. We offer payment gateway services that work with your collection agency’s existing software platforms – along with simple “pay your bill here” buttons that can easily be added to nearly any existing site. You can read more about what we do here.